A short drive from Fes are the sprawling ancient Roman ruins of Volubilis.  An UNESCO World Heritage site spread over 40 hectares; these are the most well preserved Roman ruins in Morocco.  Romans began building of the city of Volubilis around 40AD, with the aim of maintaining control of this North African region.  Development increased rapidly in the 2nd and 3rd centuries when the Romans embarked upon the cultivation of grain.

The triumphal arch, built in 217 in honour of the Roman Emperor Caracalla and his mother, originally housed a bronze chariot atop its ancient stones, and was rebuilt in 1933.  Wonderfully preserved mosaics in vivid colours, nearly all of which depict mythological scenes, can still be seen.  Remains of palaces, baths, basilicas and spectacular mosaics transport you to a time 2000 years ago.  A few miles from Volubilis is the holy city of Moulay Idriss. 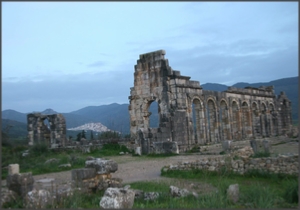 entrance fee to sites and monuments

lunch in a traditional local restaurant. 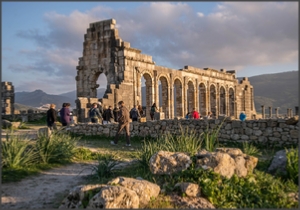 Explore Morocco in 1 day excursion from Fes with experienced guides. 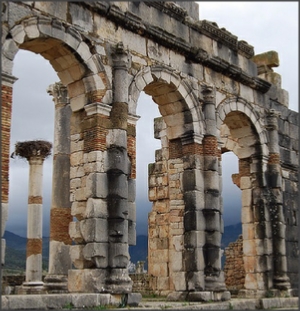